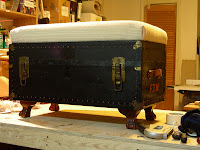 My latested upcycle project is a trunk with an upholstered seat on top. I put a lot of work into it, but it still looked like a trunk with a pillow on it. It need a little something to make it look real. Piping was the detail that was missing, and I discovered that it was really easy to do. 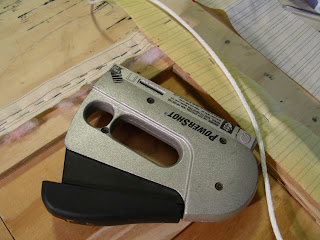 Staple the strip of fabric, wrong side up, to the underside of your seat. Half of the strip should hang over the edge.

Lay a piece of rope down the middle of the strip along the edge of the seat. 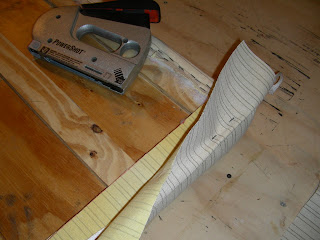 Fold the strip over the rope and work it with your fingers until it rests at the very edge of the plywood bottom of your seat. Staple it as close to the edge as you can. 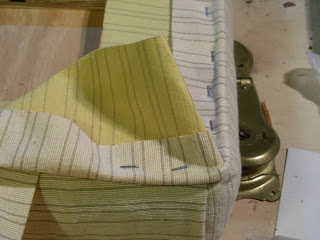 When you get to a corner, keep the rope folded tightly in the strip and fold it around the corner. Be sure that rope ends up right at the edge of the plywood again and staple it down. You can trim away excess fabric later. 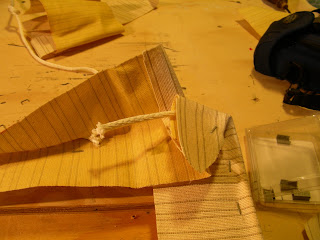 When you get to the end, or if your strip is not long enough to go around your whole piece, just fold over the edge where it will overlap. Leave the rope about 3" inches longer on the end and cut it 3" shorter on the other end so that the fabric and rope don't end in exactly the same place.


Trim away any excess being careful not to cut into the fabric of your cushion. I made my beginning and ending point at the corners thinkng it would be less noticable, but I would not do this in the future as there is too much folded fabric on the corners already.

Posted by srValentine at 4:42 AM

Email ThisBlogThis!Share to TwitterShare to FacebookShare to Pinterest
Labels: How To, upcycled trunk, Upholstering 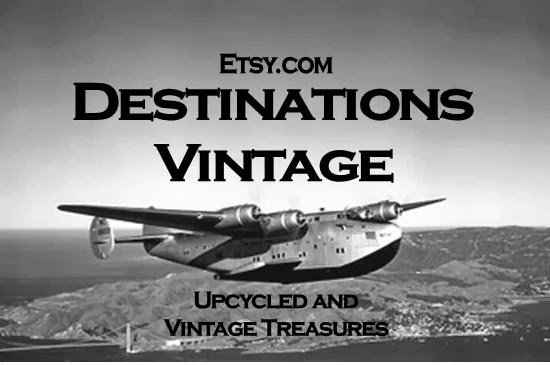